Brahma Kumaris is a worldwide spiritual movement dedicated to personal transformation and world renewal. Founded in India in 1937, Brahma  Kumaris has spread to over 110 countries on all continents and has had an extensive impact in many sectors as an international NGO. However, their real commitment is to helping individuals transform their perspective of the world from material to spiritual. It supports the cultivation of a deep collective consciousness of peace and of the individual dignity of each soul.

The spiritual headquarters of Brahma Kumaris is in Mount Abu, India. At a national level, activities are generally coordinated by local people in alignment with the spiritual principles of Brahma Kumaris, working in accordance with the laws of the land. Activities of international interest are coordinated regionally from offices in London, Moscow, Nairobi, New York and Sydney.

The role of women as spiritual leaders 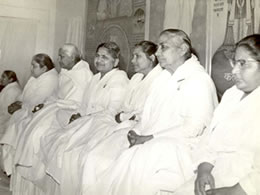 Brahma Kumaris is the largest spiritual organisation in the world led by women. It was the founder, Prajapita Brahma Baba, who chose to put women in front from the very beginning, and it has set Brahma Kumaris apart on the stage of the world's religions and spiritual organisations. For over 80 years their leadership has been characterised by steady courage, a capacity for forgiveness and a deep commitment to unity.
Although women hold the top administrative positions, the women who hold these positions have always made decisions in partnership with the men. It is a partnership and consensus model of leadership, based on respect, equality and humility. As such, it stands as an exemplar of accomplished and harmonious jurisdiction.